Full Circle, With a Small Bushwhack

It’s strange how God works sometimes. But here we were, back at the same place on the rocky shore of a beautiful lake in the Sangre de Cristo Mountains. When I was last here about a year and a half before, I was alone, seeking God’s leading where to go next. Mark and Sarah had asked me to help them start a new wilderness ministry, and it sounded exciting to me, but would it work? Could it even get off the ground, and how many years would it take to get this thing going? There were more questions than answers, but that day my heart was excited by the thought of ministering to young people in a mountain range that is literally named after the Blood of Christ. So on the shore of that lake, I decided to take the plunge.

Now this time it came full-circle. I was with four young men and women who are guides for this new thing called Journey Quest; there to scout the route where we planned to take our first backpacking group about a week later. And with each step that day I was reminded of how far God has already brought this ministry.

That first night we set up our camp amidst the snowbanks that were still slowly melting. Most of the snow had fallen just two months earlier in what many people were calling a “Snow Miracle”. But as we sat around our campfire and watched the stars appear, it felt closer to home than I’ve felt in a long time.

The next morning we got up early. We had a lot of training topics cover in the next two days, but not before taking some time to be alone with God and cooking a scrumptious breakfast. There is another lake just a half mile from the one we were at, but the route is not obvious and the lingering snow cover would make it impossible to follow the trail. Perfect! We’ll use this opportunity to work on some map & compass skills!

Reaching the upper lake went pretty quickly. The lake still had ice on it from the late winter. We found a great campsite next to this lake. Above the lake was the peak we were planning to climb later that day. Beautiful! 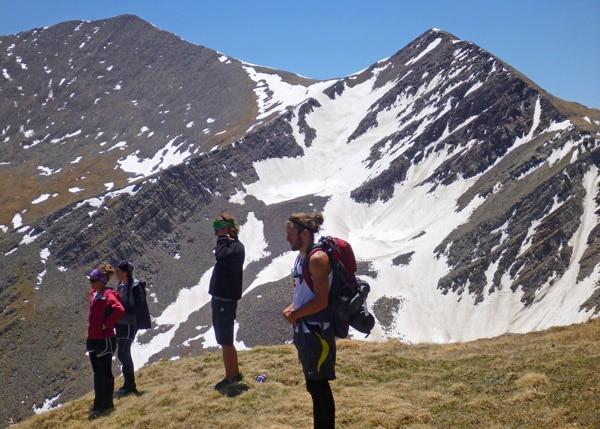 We continued to climb up above the upper lake, past a small third lake to the saddle between the North and South branches of the creek. From here we could see our planned route up the peak didn’t look too good, but there was a great looking route straight up from where were were standing, so we dropped our packs and just took just the essentials up this route, which follows a natural bench to a ridgeline, then on to the summit.

The summit of Lakes Peak was beautiful! To either side are the Wet Mountain and the San Louis valleys. North or south you have the thin spine of the Sangre de Cristo mountains, including the spectacular Crestone group. We enjoyed a nice lunch on top, rested up a bit, then headed down.

Descending into the valley we came to a beautiful meadow with the stream winding calmly through it. I had spotted this meadow on Google Earth before and thought it would be a great campsite. It was. We were in camp early enough to get a short nap before covering some more of our training topics (map & compass, initiatives & games, more leave-no-trace techniques, etc.).

Our second night out was beautiful, and we awoke to another beautiful day. After eating breakfast, I gathered the guides and sent them out on a short 2-hour solo time. In our program, a solo usually rages from 2-12 hours of purposeful, extended time alone with God. 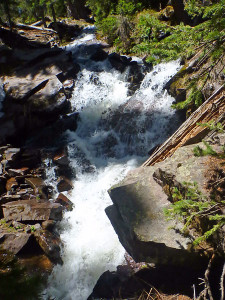 We still needed to hike out that day, so we didn’t have a whole lot of time.

The hike out started out next to a beautiful stream cascading its way down the valley. It reminded me a lot of one of my favorite routes in the San Juan’s. However, very quickly it turned into a fairly nasty bushwhack. This was the one part of the route I was concerned about, knowing that there had been a huge blow-down event a couple years before. As this wasn’t a maintained trail, none of that would be cleared if it was as bad as other areas.

Well, it was worse. It took us several hours just to go two miles. It was three-dimensional hiking at its finest! The further we went, the clearer it was in my mind that we wouldn’t be bringing a group through this. Good thing we scouted the route, I guess. We finished hiking about 7pm that day, and we were all pretty sure we never wanted to see another downed tree again. I hope there is a way to clear a decent trail through those rough couple miles in the future, because the rest of the route was truly amazing. As it turned out, we were able to use part of the route, but just had to switch to an in & out trip instead of a loop-trip. 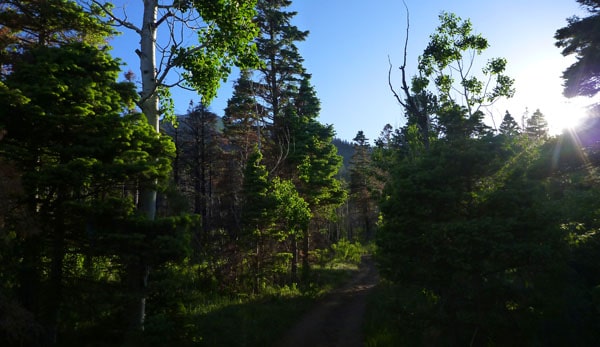 Partner with Steve in ministry by giving financially! Your tax-deductible donations are greatly needed and appreciated. Click Here to Learn More.

This site uses Akismet to reduce spam. Learn how your comment data is processed.